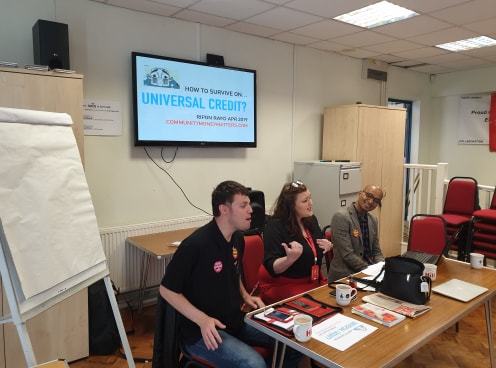 Clacton Unite Community branch held an event to help people with Universal Credit on Tuesday 30th April. Special guest, Community Money Matters blogger, debt and money specialist, Ripon Ray spoke about what Universal Credit was and sought to inform people of how it works and what claimants’ rights are.

Ripon presented an informative speech, but it was obvious that the people attending were anxious to have their voices heard about the issues they were facing, it became a much more conversational meeting.
Topics discussed were the introduction of welfare reform and the reasoning for this. Ripon highlighted the Economic crash caused by the banks in 2008 and the introduction of austerity policies in 2010 by the Conservative/Lib-Dem coalition government.
The five-week wait was discussed and how this left people in destitution, requiring food banks and loans to survive. Ripon commented about the governments suggested solution of taking an advance stating “The problem is that you can get a loan but the loan will get deducted from your ongoing income although that ongoing income itself isn’t enough”.
He also went on to discuss who was entitled to Universal Credit and how to claim and gave advise on how to appeal. He advised to not give up hope and continue to appeal decisions if the claimant believes they are wrong. He also advised having help to fill out forms if needed and where possible.
Nic El-Safty, Labour candidate for Walton and Unite Community Woman’s officer, shared her experiences with the DWP fit for work tests and offered hope to those attending that were experiencing their own unfair decisions.
Mr. Ray also spoke about applying for help from the local council regarding help to top up rent payments, when the maximum is not covering the full amount and advised to continue to apply as even if you have been turned down on a first application, a further application could succeed, dependent on the level of budget available.
Following on from the educational part of the meeting Ripon spent time answering questions and giving advice to those that needed it.
What was clear is that Universal credit was the cause of much confusion and anxiety to people. Those that had gone through the Universal Credit system were left struggling with minuscule sums of money left over after bare necessities, which didn’t always include food. Others were being forced onto Universal Credit after being wrongly declared fit for work and others were misled to believe they were not entitled to claim Universal Credit and were being left without financial support.
Clacton Unite Community Branch’s Secretary, George Taylor made a comment in response to the concerns of many of the people there about the way they were being treated under the new welfare reform, he said. “We are living in a hostile environment, all these policies, coming from this government are attacking working people, disabled people, vulnerable people, unemployed people, not their people, they are giving their people tax breaks”.
Unite Community sought to help the local community by holding this event and will endeavour to continue to support and care for the local community, especially helping those most vulnerable to know their rights.