43% of children in Tower Hamlets are living in poverty according to Trust for London. 7.7% of the working population are unemployed in the borough. Whether to claim universal credit or not would be a big question for a lot of people.  In order to raise public awareness of universal credit in the local community, Universal Credit Action Network (UCAN), have organised a public meeting. You can hear from local campaigners and advice charities on the impact of welfare reform to the local community. If you are free on 18th December at 6pm, pop over at Brady Centre, Whitechapel. Refreshment provided! 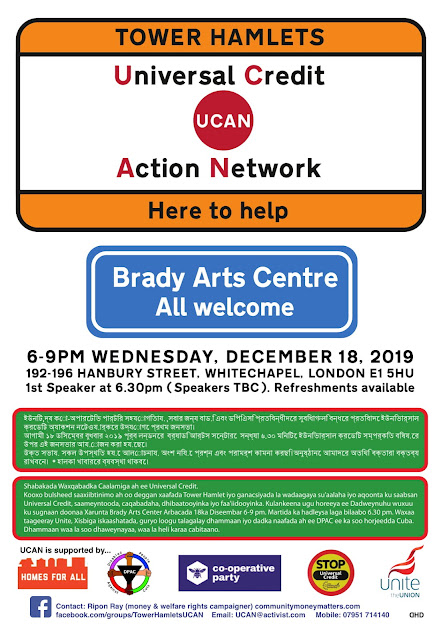 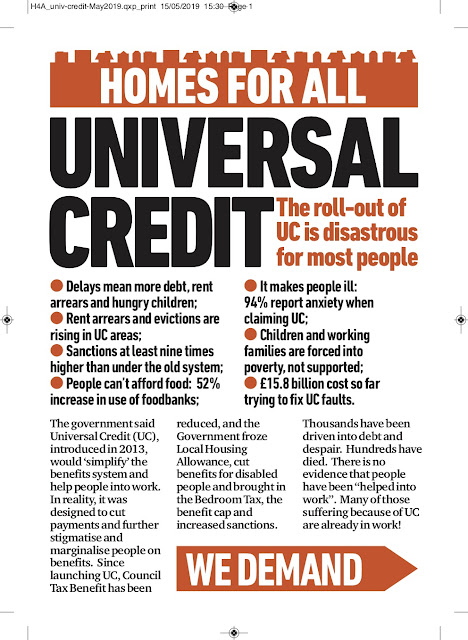 Hard Times: Campaigners clash with council over council tax support. Photograph: Marco Verch.
A cross-party campaign is calling on Hackney Council to walk back a recent cut to tax relief and instead provide full support to the borough’s poorest residents.
The Town Hall came under heavy fire from anti-poverty charity Zacchaeus 2000 Trust (Z2K) in September last year after it announced plans to increase the amount of council tax paid by working age residents in financial hardship.
In order to offset government cuts, the council made the decisionearlier this year to go ahead with changes to its Council Tax Reduction Scheme (CTRS), increasing the amount paid by working age claimants from 15 to 17 per cent.
The No Poll Tax 2 campaign has now started a petition calling on the local authority to think again and provide 100 per cent support through a “fully funded Council Tax Benefit Scheme”.
Z2K campaigner Jen Durant said: “We strongly campaigned against Hackney Council’s plans to cut council tax support for people on the lowest incomes.
“While we understand the financial pressure local authorities are under, we see no reason why the council is choosing to push the burden of government cuts onto its poorest residents.
“We have long argued for a return to 100 per cent council tax benefit, and we very much hope Hackney will follow the lead of boroughs such as Tower Hamlets and Camden in reinstating full support.”
The cut to council tax support for roughly 27,000 working age claimants was made in response to a predicted £500,000 rise in the cost of the CTRS,  and against a backdrop of a fall in financial support from central government.
The council initially planned a 5 per cent cut – meaning those affected would have to pay 20 per cent of their bill – but the idea attracted sharp criticism from local political parties.
The Town Hall then settled on 17 per cent, effectively a 2 per cent cut, after a fraught consultation process during which a Z2K petition labelled the original plan “absurd”.
Modelling undertaken by consultancy firm Policy in Practice (PiP) predicted that the current 17 per cent rate would leave vulnerable households “more impacted than non-vulnerable households”.
Both Hackney’s Liberal Democrats and Greens have signed up to the No Poll Tax 2 campaign, which is pushing for the council to imitate other boroughs such as Tower Hamlets and Camden in offering 100 per cent council tax relief through the scheme.
Vice chair of Hackney Liberal Democrats Darren Martin said: “Nobody disputes that funding cuts to local government have left Hackney Council with difficult choices to make, but they do have choices.
“The neighbouring borough of Tower Hamlets with similar pressures to Hackney provides 100 per cent council tax support for its poorest residents and we believe Hackney Council should do the same.
“The funding pressures are not likely to get any easier in the next few years and the reality is that the cost of the CTRS will continue to rise.
“The answer is not to ask the poorest people to pay – the solution is to find the additional funding to safeguard the scheme and protect those who need it the most.”
Debt adviser and campaigner Ripon Ray added: “Asking people to pay contributions to council tax regardless of income or circumstances is regressive and amounts to a new poll tax.
“Hackney is attracting wealthy residents and many of them can pay more. It appears that there is lack of consideration for those who are unemployed, disabled, single mothers or zero-hours contract workers.”
The campaign is also calling for exemption of bailiff action for those on council tax support “as a matter of principle”.
Hackney Green Party campaigner Samir Jeraj said: “[Bailiff action] causes immense distress to people who are already under a lot of pressure and actually only ends up driving people further into debt.”
Responding directly to the petition, Hackney Mayor Philip Glanville said that offering 100 per cent relief would cost the council somewhere between £2.6 million and £3 million.
Mayor Glanville said: “That £3 million, it would have had to come from somewhere else, it would have led to further cuts in services.
“This isn’t the only service to the most vulnerable in the borough. There’s housing support, there’s our youth services, debt advice within the council, it’s equivalent to what we spend on libraries –  I don’t want to be going to look at these services for that £3m.
“I would say to the campaigners, we are absolutely with you that this should be a fully funded scheme. The people responsible are government, and they need to return that funding to the system.
“And until they do, it’s very hard for boroughs to make up that shortfall. Boroughs like Camden have a very different shortfall in terms of number of claimants and levels of council tax, so doing it here is not as easy because we have a lot more people in receipt of council tax benefit than Camden does.
“We did a really big consultation exercise last year. A lot of the same people were involved in that consultation process, and a lot of poverty action charities and organisations both inside and outside the borough made their views known.
“We listened, and stepped back from the proposals to increase the contribution to 20 per cent.
“We settled on 17 per cent because it met some of those deeper concerns about the impact of going to 20 per cent, but it still reflected the challenge of our financial position in making sure that the scheme was sustainable for the long term.”
Mayor Glanville added that the changes to the scheme would be reviewed half way through the term of his administration, and that “halfway through the first year of the scheme operating is not the time to suddenly change.”

Hackney Council has seen a backlash within the Labour Party over plans to increase council tax contributions for some of the borough’s poorest people.

Mayor of Hackney Phil Glanville: 'Council tax changes not an easy decision.' Picture: Gary Manhine/Hackney Council
The council is consulting on whether to change its council tax reduction scheme, which it says has become “too costly to administer” at £25.5 million a year for its 32,000 recipients.
The proposal is to reduce the 85pc reduction for working age residents by 5pc by April. The contribution of a single parent with four children at school living on jobseekers’ allowance and child tax credits, living in a band E property, could rise from £3.50 to £6.43 a week, for example.
And a single person over 35 with employment support allowance of £73 weekly, living in a band B property, could see payments rise from £2.23 a week to £4.09 a week. But pensioners would not be affected.
Some community and political groups are opposed to the plans and Hackney South Labour Party has voted for a motion asking the council to reconsider – and even go as far as scrapping council tax charges for the poorest altogether.

It’s a well-known fact that individuals who suffer from a hampered mental capacity - be it mental health or learning difficulties - are most likely to be vulnerable in our communities. They are also more likely to be victims of miss-sold products and services by companies, even though organisations that are providing financial products and services have a duty under the Financial Conduct Authority (FCA) to take extra care towards these individuals. This is what the FCA has to say about vulnerable customers: ‘  The vulnerability of the customer, in particular where the firm understands the customer has some form of mental capacity limitation or reasonably suspects this to be so because the customer displays indications of some form of mental capacity limitation  (see  ■  CONC 2.10) But due to a culture of intensive selling to consumers, generated by employers placing and enforcing - often difficult and unrealistic - performance goals which are attached to tempting
50 comments
Read more

“Thank you so much for coming along, the ‘money’ workshops were by far the most popular, that was you and ‘Direct Payments”        Lisa Taylor Carers Coordination Service Manager           Hackney Carers Centre
18 comments
Read more

‘I have not been able to pay my council tax for last four years. Bailiffs have lied to me to get money from me. I still can’t afford it!’  says Joanna Robinson on Money Matters show on East London Radio in March 2018.   During the period 2016-17, bailiffs were used by councils on nearly 1.5 million occasions in order to attempt recovery of council tax arrears. As in Joanna's case, residents were summoned to court for being too poor to pay - accruing court costs, subjected to the ignominy and anxiety having to face enforcement agents, and already too poor to pay, further indebtedness.   As I hear the horror stories of bailiff’s knocking on debtors’ doors under the new Council Tax Reduction Scheme (CTRS), I am beginning to worry that the Scheme is really just a Poll Tax rehash. I was too young to remember what the Poll Tax was when it was first introduced in the late 1980s. My parents never spoke about it. In my work I started to notice from 2013 onwards that mo
32 comments
Read more

Ripon Ray
My name: Ripon Ray. I am a consumer debt and welfare rights specialist. I am a regular contributor to James Cannon's advice and information show on BBC Sussex. I have been on BBC Money Box, BBC London Radio and LBC. I trained the Institute of Money Advisors, Trust for London grants managers, Positive Money campaigners on a number of money and debt related issues. I specialise in universal credit and am a registered money trainer with the Money Advice Trust. My interest in education made me channel my energy on educating members of the public on universal credit by setting up Universal Credit Action Network (UCAN), a campaign and education forum. You can find more on UCAN here: Www.onlineucan.org